The Weather In Langkawi

Langkawi is an archipelago made up of 99 islands located on Malaysia’s west coast. The weather in Langkawi is more consistent and sunny than in many places in Malaysia. It is protected in the western direction by Sumatra and in the east by Malaysia.

In an extremely warm and humid environment, Langkawi sees average temperatures which show very few changes all year long. The climate of this area in Malaysia may sometimes be unendurable to people not acclimated to it with temperatures ranging from 24° C to 34° C and high moisture levels.

The average water temperature in Langkawi is likewise deemed ‘warm’ by tourists and visitors, yet a dip in the ocean will leave you feeling rejuvenated and ready to take on any challenges or relaxing activities you have planned for the day.

Langkawi has two different seasons: The dry season which is known as summer for tourists and the rainy season. The dry season includes the winter months for typical tourists who come from the northern hemisphere, whereas the wet season is our usual summer in Malaysia. The changeover between the two seasons is called ‘mid-season’. 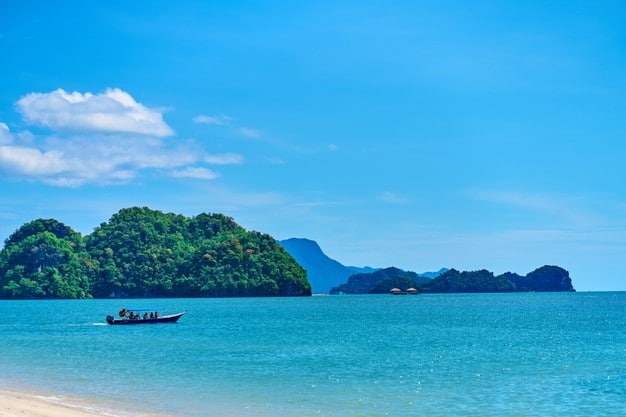 Langkawi has a year-round climate that many would describe as “summer.” From December to March, however, there is a distinct summer season with hot and dry periods and much less rainfall. Throughout the ‘summer’ period, the light wind blows west, carrying little or no rainfall.

This dry season is usually the busiest season in Langkawi as visitors storm in with huge numbers visiting Langkawi, between January and March when there is little rain and most days are clear. This is the ideal time to visit Langkawi whether you want to relax on the beach, go trekking, or enjoy water sport activities.

February is the hottest and driest month of the year, with an average of 9 hours of sunlight each day. At this time of year, the major beaches, hotels, and resorts should be quite crowded. If you prefer to visit Langkawi outside of peak season, consider going in April. April is in the mid-season, outside of the dry season, but it still has plenty of sunlight and fewer rainy days than the months ahead. 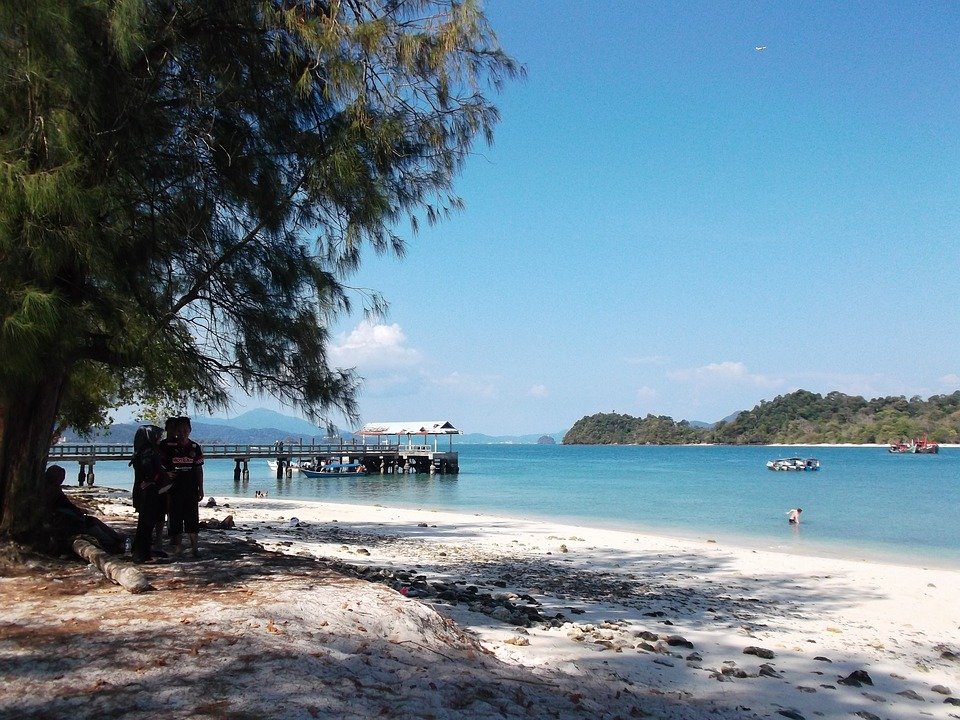 With the arrival of the rainy or wet season, the long dry summer period comes to an end. Langkawi gets an amazing 2500mm of rain per year on average. The majority of this rainfall occurs during the rainy season, with peak rainfall averages falling between September and October.

October is the wettest month of the year, with an average rainfall of 344mm. With an anticipated 26 rain days each month, expect to spend most of October inside. Most days throughout the rainy season months may still anticipate mild weather, with average temperatures ranging from 27°C to 28°C. With October having the most rainfall, it’s worth noting that November has the fewest average daily sunlight hours, with just 6 hours per day. As a result, November is not considered the best month for a sunbathing session.

Though European visitors prefer to visit the island during the summer months (the northern hemisphere’s winter), Middle-Eastern tourists prefer to come during the rainy season, perhaps to escape their equally dry and arid environment. When opposed to the dry season, the rainy season is less popular with visitors.

While some may interpret the term “wet season” as a poor time to visit Langkawi, keep in mind that the warm air and ocean temperatures are still well within the description of “Tropical-Island-Paradise Weather,” as many visitors anticipate to visit Langkawi.

Because of the tropical landscape, between September and October, Langkawi will be experiencing heavy rainfall from monsoon winds. The weather in Langkawi is usually not badly affected, although rain showers are sometimes accompanied by violent storms.

The sea around Langkawi is hence fairly quiet in comparison with the eastern coastal attractions. Visitors flock to the island in the rainy season to enjoy a wide array of activities such as duty-free shopping or massages at the various spas on the island.

With all that being said, ever wondered when is the best time to go to Langkawi?

Best Time To Go To Langkawi

Between November and April, the weather in Langkawi is the greatest season to go on holiday, combining sunshine and mild rainfall. During day temperatures between 30°C to 35°C, at night temperatures between 28°C and 29°C are rather constant. In other words, the sun will last till midday and a cloudy sky at night.

Langkawi weather also has a rather high degree of humidity, so local people and visitors may frequently rest during the afternoons at Pantai Cenang and Pantai Tengah. The island is also quite popular for fantastic diving and snorkeling possibilities and watersports experiences such as jet-skiing, parasailing, and banana boating. at this time of year.

Langkawi offers a great deal for an adventurous journey from cruises to parasailing. But when would be the perfect time to organize a trip based on a monthly weather breakdown on Langkawi Island? 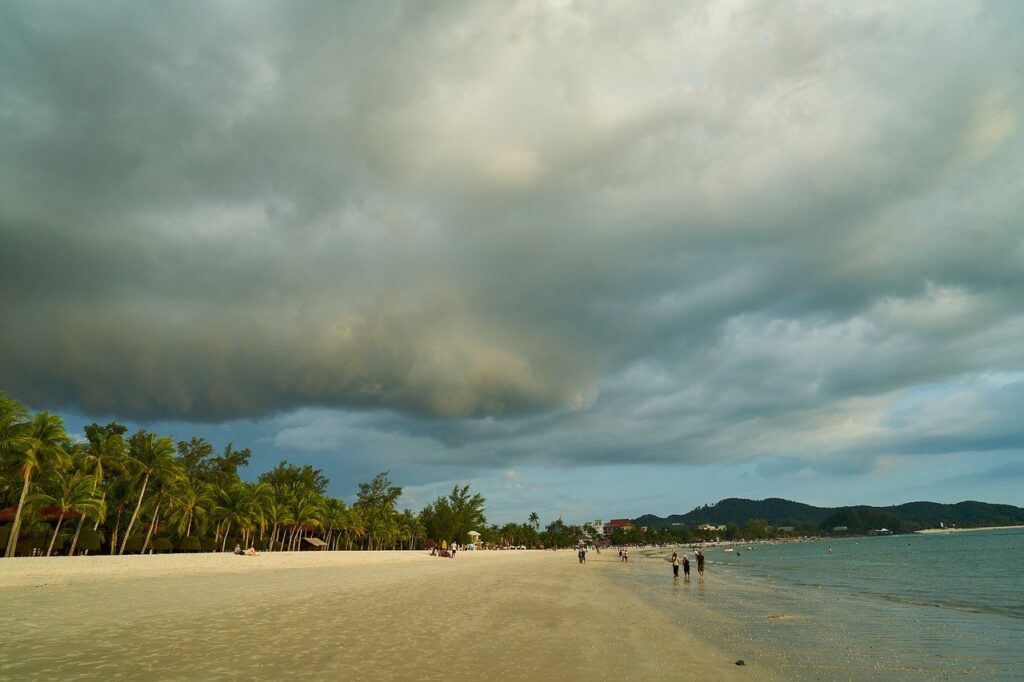 Humidity is usually at its lowest early in the year. So, if it’s a humid environment that you’d like to avoid as much as possible, then January could be the best time to visit this beautiful destination.

However, regardless of the time of year you visit, it’s advisable to bring a small wet towel you can carry around and drink plenty of water throughout the day. If you’d prefer to get drinks as you need them, then fresh coconut waters are widely available. Humidity usually ranges from 53% to 85%. The average air temperature on Langkawi Island in January is between 23℃ and 33℃, with sea temperatures specifically averaging 29℃. Despite a typical rainfall of around 50mm, there’s usually approximately 8 hours of sunshine.

Sea temperatures and humidity levels are similar to January, with sea levels maintained at 29℃, and humidity reaching 53-87%. Air temperature maintains the same low of 23℃ and reaches a similar high of 34℃. With a typical rainfall of around 47mm, you’ll be pleased to know that you can usually enjoy around 9 hours of sunshine each day in February.

The average air and sea temperatures remain the same in March as they were in February. However, one significant difference is the usual level of rain, which reaches 91mm. You can still expect around 8 hours of sunshine on an average day. If you don’t mind increased humidity with highs of 93% and lows of 87%, March has one of the lowest average rainfall levels of all the months.

Air temperatures average increases slightly to 24℃-34℃ and sea temperatures reach 30℃ in April. The main level continues to increase month-on-month, with an average of 169mm. Whilst humidity levels obtained a high of 93% and a low of 65%, the sunshine is still expected to last for roughly 9 hours per day. Furthermore, by booking outside of peak time, you should be able to save some money on the hotel and travel costs.

As air temperature levels and sea temperature remain identical to April, the main difference is increased average rainfall. With rainfall typically equating to 256mm in May, we can still expect approximately 8 hours of sunny weather on a typical day. The humidity also maintains high readings, with a high of 93% but the low increasing to 70%.

An average temperature range of 24℃-32℃, with a maintained sea temperature of 30℃, demonstrates no drastic change. With the humidity range maintained from May, rainfall dropping to a daily 218mm average, and 9 hours of sunshine being seen as typical throughout, June could be seen as slightly more welcoming than May. 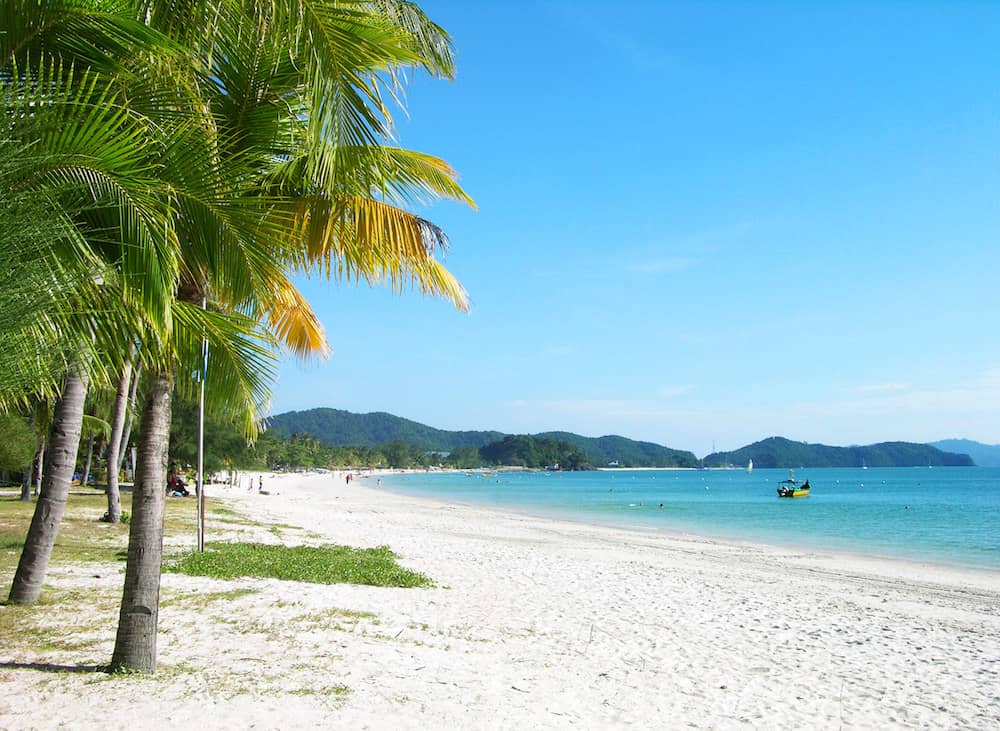 Whilst sea temperature and the humidity levels remain the same, the temperature is on average one degree lower, with the range comprising of 23-31℃. Daily sunshine in July decreases by one hour on average and rainfall increases slightly to a 233mm average.

Daily sunshine in August maintains an 8-hour average and sea temperature remains consistent. However, there is a further increase in rainfall, with a typical daily level reaching 249mm. The humidity range becomes 70-95% whilst air temperature also sees minimal change, reaching an average of 24-31℃.

Humidity levels reach a high of 93% and a low of 70% with an air temperature range of 23-31℃, showing that these measurements have reverted back to matching July’s statistics. There is a distinct difference in rainfall, however, with the average rising to 339mm in September. Daily sunshine levels are maintained at 8 hours on a typical day.

The air temperature range in October remains the same as September, whilst the sea temperature has dropped 1℃. A usual sunny day would include 7 hours of bright weather but the rain level is expected to reach an average of 344mm. Humidity levels range from a low of 67% to the same high as September (a significantly hot 93%).

By November, the rain level starts to significantly decrease, with average levels being 215mm per day.

Sea temperature stays consistent at 29℃, while average air temperature ranges from 23℃ to 32℃.

However, daily sunshine reaches its lowest average of 6 hours per day. Although this would probably still offer enough sunshine for an enjoyable holiday experience with significantly less rain than October.

Air temperature and sea temperature averages remain consistent with November, whilst humidity decreases slightly to a 60-90% average. However, with rainfall averaging just 94mm a day – less than half that of November – and 7 hours of sunshine expected per day, December could be the ideal time to visit Langkawi. Thinking of planning a once-in-a-lifetime trip with unforgettable memories? Contact us today, so our specialist team can help you plan the most innovative vacation you’ve ever experienced.

Now that you are aware of the weather in Langkawi, it should be simpler to plan a vacation here to avoid rain or monsoon to kill the buzz of water sports in Langkawi. After all, you surely want your holiday to be unforgettable!

20 Best 5 Star Hotels & Resorts In Langkawi (2022 Updated)
We use cookies to ensure that we give you the best experience on our website. Do you accept our use of cookies?YesNoPrivacy policy